In November of 2018 Tina Walker, the president of an Oklahoma-based industrial hemp company called Botanic announced the harvest of 104 acres of hemp two weeks prior – the first legal hemp crop grown in the state in generations.

The strain was called Yuma Crossbow and it fired the first arrow in the race to make industrial hemp one of the state’s top cash crops.

The industrial hemp legislation had been signed into law by Governor Mary Fallen in April of that year and farmers were eager to get started on this brand new opportunity. It was reported that 445 acres were grown in the state right off the bat.

It seemed like something brand new yet it had a familiar feel to it, like it had been here before and this was a return to our roots, the same way it feels in every place where hemp is re-introduced.

Everyone knows about the history of hemp in Kentucky. Books have been written about the hemp industry in old Virginia. Pennsylvania hemp history is famous. We know it grew extensively in all of the original 13 colonies. Missouri is well known for hemp as is Wisconsin and Minnesota. All over America we see histories of hemp. But Oklahoma? They grew hemp in Oklahoma? The answer is yes. How do you think they roped those dogies? With good old hemp rope.

There were hints of the old industry. In various parts of the state there were vigorous stands of wild hemp, remnants of the past.

Ryan Early, the CEO of Hempyre Genetics set about on a mission to find and collect seeds from wild hemp growing on farms and woods to identify and develop strains of hemp particularly adapted to the soil and climate of Oklahoma.

The history of hemp in Oklahoma has been speculated and hinted at but not a lot of details are readily available. Some hemp was grown in the state but it was always hoped that it would someday develop into a much more extensive industry.

Lands were first opened up in Oklahoma for settlement in 1889 though some European-Americans had staked claims on Indian lands before the official date. Settlements increased over the next 20 years and in 1907 Oklahoma was officially recognized as our 45th state.

In the years of 1889 to 1907, during the days of the early development of Oklahoma hemp was a forgotten crop in most of America. There were pockets of certain areas of the country where hemp was still being grown commercially and many farmers grew it on a small scale for non-commercial purposes but for the most part hemp was dead. For the most part anyway.

The year Oklahoma became a state hemp was undergoing a revival of some sorts in various parts of America. Areas that had previously abandoned the crop were returning to their roots. The USDA was doing extensive hemp research under the guidance of Lyster Dewey.

“The farmers of Oklahoma should turn their attention to the growing of hemp,” said F. S. White, agricultural commissioner of the Rock Island-Frisco lines, who was in the city today.

“Last year this country imported $50,000,000 dollars worth of fiber to make binder twine, rope and other products,” he continued. “We might just as well and better keep this money at home. Hemp can be raised in almost any section of the country and with the modern machinery for harvesting and breaking it the crop is a very profitable one. From 1,000 to 2,000 pounds of fiber per acre can be grown and it is now selling at from six to eight cents a pound. It is easily and cheaply raised, requiring little labor and matures in 90 days. The Universal Fiber company of Chicago and other companies will furnish seed, contract for the entire crop and where 500 acres are raised in a community will furnish a machine for breaking it.”

“We used to raise a considerable quantity of hemp in this country but the crop was gradually abandoned. With the invention of new machinery for harvesting and breaking it, the industry is being revived. The largest amount is now raised in Kentucky. Missouri and Nebraska are also raising it. A number of farmers in the panhandle country are also successfully growing it. It will do well in Oklahoma. As soon as farmers take hold of the crop and begin to raise it in sufficient quantities, factories for the manufacture of twine should be established at home. There is no necessity of sending it to the east to be worked up.”

Mr. White, who is a recognized authority on agriculture and horticulture, will be here on Monday with a special car of exhibits and will give free lectures to farmers and all who are interested in these topics.

In January of 1912 the Haskel News wrote:

White ash land is good for hemp. We have plenty of this kind of land let’s try some of it in hemp.

In 1913 The Daily Oklahoman published an alarming article that said over the prior 30 years the bird population of the state had drastically declined and were threatened with extinction. They urged farmers to grow strips of various seed crops to bring back “our feathered friends”. They wanted to model the efforts of the famous Henry Ford in Michigan. Read the article here

In 1916 The Oklahoma City Times published the following article:

Chikasha, Okla., April 27 – (Special) – That southern capitalists are interested in Grady county land is shown by a letter which was received this week by the mayor from a firm in Lexington. Ky., asking if it would be possible for them to secure at least 200 acres of land lying between this city and Anadarko to be used for the purpose of growing hemp.

On July 20 of 1916 though the excitement mounted as BIG news was announced in the Muskogee-Times Democrat. 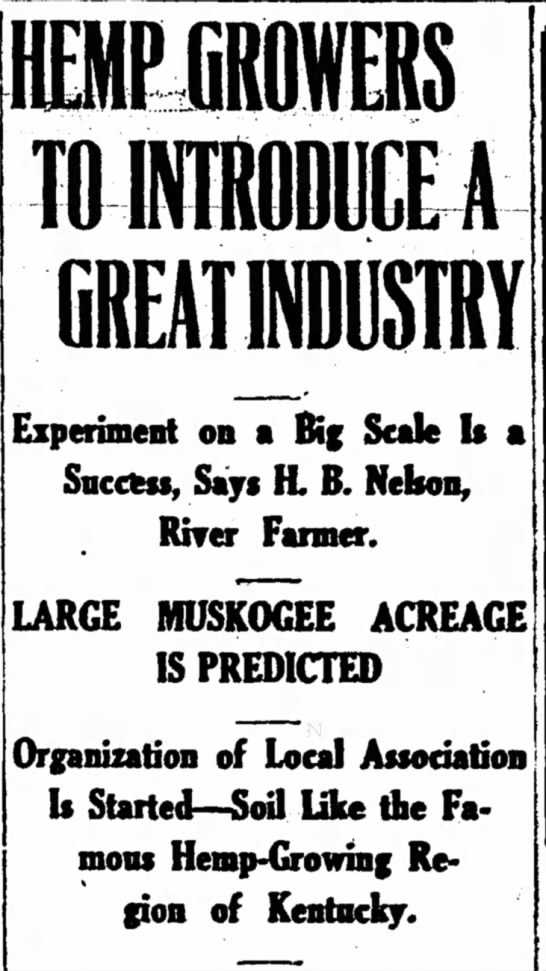 Experiment on a Big Scale Is a Success, Says H.B. Nelson, River Farmer.

Following a two years’ test proving that hemp can be grown in the rich bottoms of eastern Oklahoma with great profit, farmers of Muskogee county are talking a Hemp Growers association. The plan is to conduct a systematic campaign to make hemp the staple crop of this section.

H.B. Nelson, who two years ago introduced hemp from Kentucky on his Arkansas river bottom farm four miles north of the city, says the local soil and climate are ideal for the crop. He realized more profit on three and one-half acres of hemp last year than on one hundred acres of oats adjoining. He believes the general introduction of hemp raising will make Muskogee the richest agricultural county in the state.

The first hemp ever grown in Oklahoma ,so far as known was that on the Nelson farm last year. The seed sold at $12 per bushel and the fiber brought a fancy price on the eastern market. This year Mr. Nelson has forty acres planted in hemp. The crop is in excellent shape despite the drought and promises rich returns when it is harvested in August.

Oklahoma’s pioneer hemp farmer is enthusiastic. He says the crop will yield bigger returns per acre than anything that can be grown. The soil of the rich Arkansas river bottom, he describes as very similar to that of the Kentucky bottoms, the greatest hemp region in the world.

Mr. Nelson has on display in the window of the American National bank, Third and Broadway, a bundle of the long, green-stemmed plant. The stalks are eight or nine feet in length and of very rank growth. They are a fair sample of the forty acre crop almost ready for harvest.

Not a Social Article.

“Hemp,” said Mr. Nelson discussing his hobby today, “is the salvation of Muskogee county. I don’t mean the hempen rope for social purposes but the agricultural product. Corn looked good but is withering in the hot winds. Cotton is either quoted at a low figure or the crop is a failure. Experiments have convinced me that hemp can be grown here with success in either wet or dry weather. The crop never fails and the price is always good.

“The last legislature created a market for hemp right at home when it appropriated $125,000 to build a cordage mill at McAlester. If we don’t furnish the raw product Kentucky and the east will. Hemp in Kentucky is now selling for $200 per ton and land suited for its growth rents for $20 per acre.
Used by Navy.

“The demand for hemp is always far in excess of the supply, insuring a market at fancy prices for years to come. The Navy requires the greater part of the Kentucky crop for use on ships, the rigging and cordage being made of hempen strand. Ropes, ship rigging, marline, carpet yarn and many other commercial products are made from hemp.

“The Kentucky experimental station has analyzed several samples of Muskogee county hemp and says the fiber is of the best. Hemp is sown in the early spring like wheat and cut with a mower in August. It is prepared for market by separating the fiber from the stalk. The former is baled like cotton and sent to market. The latter is used for forage.

“The greatest expense connected with the crop is the labor in breaking it out. This expense does not come until you know you have a crop. The abundance of negro labor in the river bottoms will make it easy to work the fields and the expense will be far less than that required for either corn or cotton.

“We are busy laying preliminary plans for a Muskogee County Hemp Growers’ association. The plan is to get a certain number of farmers to pledge themselves to grow hemp next year. If this is done hemp will soon become Muskogee’s biggest and richest crop, farmland will increase rapidly in value, and prosperity such as we have never dreamed of will greet the Arkansas river bottoms”.

So basically, Oklahoma of 1916 was at the exact same stage as Oklahoma 102 and 103 years later. Hemp is being greeted with the same expectations and excitement.

So did hemp really take off as expected in 1916? More research is needed to determine the extent of the industry but the wild hemp reported in many sections of the state offer us a clue that more hemp was grown in the state than might be realized.

This is an abbreviated article. Stay tuned for a more expansive look at the history of hemp in Oklahoma coming soon!